At the annual conference for the Museum Association of New York (MANY), President Bill Sauers accepted a Certificate of Commendation for the “Our Town in World War II” project. The project was submitted in the category of “Engaging Communities“ and was one of only fifteen awards given out at Lake Placid.

Bill Sauers and Marie Poinan were able to attend the three-day conference thanks to a travel grant application submitted in November of 2015. This grant was one of 46 awarded across NY State and covered the cost of registration, hotel lodging and mileage. Sessions were designed for museum professionals to focus on skill building and organizational capacity building. Bill and Marie were able to connect with other nonprofits to explore new ways to increase awareness, new programming and investigate the museum’s place. 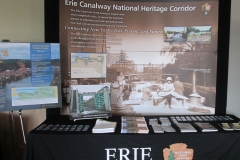 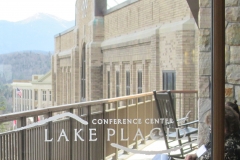 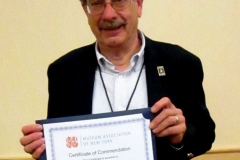 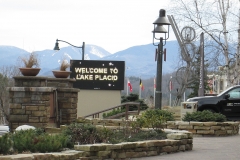 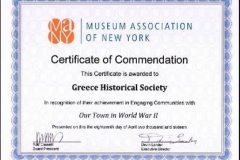 The Museum Association of New York (MANY) of Troy, NY announced the winners of its annual 2015 Awards of Merit awards, which are presented to New York State Museums and Heritage Organizations.

The Greece Historical Society received a Certificate of Commendation for its  “Our Town in World War II” project and is extremely grateful to be chosen as one of only fifteen awards that were given statewide! The certificate will be awarded to the organization at the Museum Association’s upcoming annual conference in April.

The award recognizes outstanding work in the museum community, rewards staff and volunteers, and provides encouragement for the development of new and innovative projects. Winners included individuals and organizations who were recognized for the exhibitions and educational programs.

Deadline for submissions was December 11, 2015 and we submitted our World War II project for consideration. One of the most successful exhibits ever staged, the society received overwhelming community support in terms of the increased number of visitors who came to view the exhibit, the number of people who signed up and came to the additional programs generated and the response from local veterans.

Also four books were produced in conjunction with this exhibit that recorded the history of what it was like to experience World War II- both in the service and on the homefront in Greece.

The other local Finger Lakes area recipient was the Ontario County Historical Society.

To read the press release and for a list of all 15 winners, here is the link to the MANY website: