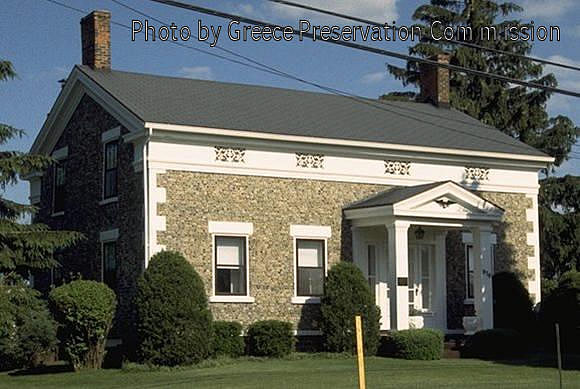 The Covert-Brodie-Pollok House is located on a 14.95-acre site on the east side of North Greece Road in the southwest quadrant of the town. The designation area incorporates the main house (1832), an attached garage at the rear of the house (early 1940s), a contributing well, a non-contributing shed and a non-contributing storage barn. A 14-acre expanse of lawn surrounds the house on the north, east, and south. The property is historically significant for its long association with the Covert and Brodie families. The Coverts were early 19th century settlers/farmers in the North Greece area and the builders of this house. The Brodie family and its descendents, also farmers, have owned the property since 1914. The Covert-Brodie-Pollok House is architecturally significant as an outstanding example of an early-19th-century, Greek Revival cobblestone farm house retaining a high degree of integrity of design, materials, and craftsmanship. Cobblestone architecture is unique to the Central and Western New York area of the country. It developed in the late 1820s when settlers who were clearing land and preparing fields for planting collected cobblestones as building materials. It is one of four existing cobblestone buildings in the town of Greece.