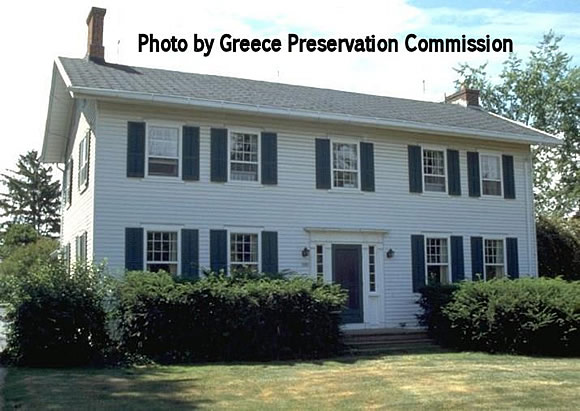 The Rigney-Feeney House is located on a multi-acre site on the south side of Latta Road in the northeast quadrant of the town. The designation area incorporates approximately one-and-one-half acres of land and the main house (c. 1850s). Also located on the site are: a non-contributing frame garage (1958); two non-contributing sheds; an in-ground swimming pool (c. 1960), said to be one of the first in the town; and a stone-lined well. Originally, the site was part of a 250-to-300-acre parcel of land that was developed as a farm. The property is historically significant for its associations with one of Greece’s pioneer families, the Rigney family, and the early 19th-century Irish immigrants who settled in the Paddy Hill area. The house, with its large multi-acre site is a visual reminder of Greece’s agricultural heritage. In the early 1950s some of the property from the original farm was developed into the Picturesque Acres and North Point housing tracts and the Greece School District purchased about 35 acres of the property for Paddy Hill Elementary School.