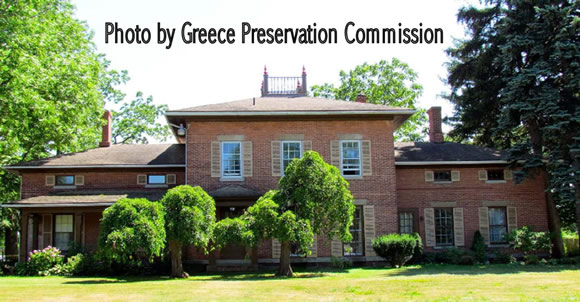 The Joseph Fleming House is currently located on a ten-acre site on the south side of Latta Road in the northeast quadrant of the town. The designation area is just under one acre and includes the main house, a one-story, gable-roofed, wood-framed and sided shed or milk house, a two-story, aluminum-sided, post and beam carriage house, and a two-story, concrete block, three bay garage. At least two barns were also located on the site. One was demolished in 1960; another in 2010. Originally, the site was part of a 300-acre parcel of land that was developed as a farm by Joseph Fleming, one of the town’s early pioneers. Fleming was born in King’s County, Ireland in 1812 and came to New York in 1837. A mason by trade, when he came to North America, he worked on several public works projects including the first Croton dam on the New York water works, the first suspension bridge over the Niagara River at the falls, and the enlargements of the Genesee Valley Canal and the Erie Canal. He also supervised the construction of Mother of Sorrows Roman Catholic Church, located on Latta Road at Paddy Hill, one mile to the west of his home.